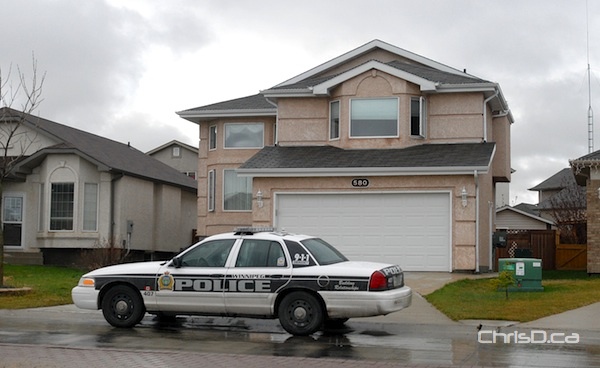 A Winnipeg police cruiser sits in front of a home on Island Shore Boulevard where a woman's body was discovered. (STAN MILOSEVIC / MANITOBAPHOTOS.COM)

A death of a 35-year-old woman in the Island Lakes area of Winnipeg is being treated as a homicide.

Police were called to the 500 block of Island Shore Boulevard at about 5:40 p.m. on Tuesday, where they located the body of Samantha Pourchamani. The woman was pronounced deceased at the scene with upper body injuries.

Police believe the death is a domestic matter and related to a head-on collision about 20 minutes later near Rosenort, Manitoba. A 49-year-old man was killed when his Chevrolet Impala collided head-on with a semi-trailer truck.