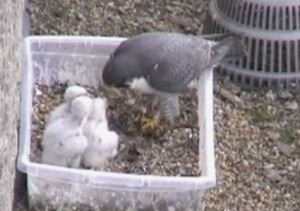 A screen grab from a previous year's falcon cam at the Radisson Hotel.

The popular falcon cam atop the Radisson Hotel will go live today, live streaming a family of nesting peregrine falcons.

The CBC Manitoba-led initiative is launching earlier than usual this year due to a mild spring, which has allowed for the falcons to return sooner than in previous years. There are already four eggs in the nest.

“Over the years, nature lovers and classrooms from Manitoba and around the world have watched the falcons hatch and witnessed their growth being nurtured until their eventual flight away from the nest,” said John Bertrand, managing director for English radio and TV at CBC Manitoba.

A pair of endangered peregrine falcons have nested on the Radisson since 1989. CBC and the Peregrine Falcon Recovery Project launched the web cam in 2006, adding an additional camera in 2011 in Brandon to follow a second pair of birds in Westman.

“We are excited to continue to lend eyes and ears, quite literally to this project, resulting in over 4.4 million page views since its inception,” Bertrand added.

The falcon cams will be online until mid-July.