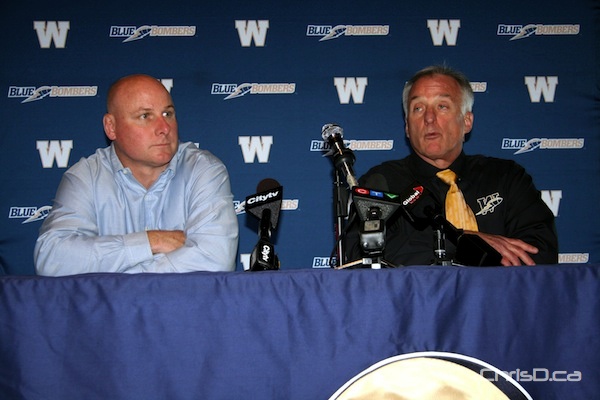 WINNIPEG — The Winnipeg Blue Bombers made some serious waves in the hours leading up to Thursday’s CFL Canadian Draft.

Without a first-round pick due to their selection of Canadian-born receiver Kito Poblah in last year’s supplemental draft, the Bombers traded their two second round selections (eighth and thirteenth overall) for the third-overall pick, and selected offensive lineman Tyson Pencer. The 6’7” 330-pound 23-year-old tackle is a North Delta, British Columbia-native who played two seasons for the Washington State University Cougars before returning home and playing part of the 2011 season with the Okanagan Sun of the Canadian Junior Football League.

“(We got) one of the three players that we thought had a legitimate chance to become eventual full-time starters for us,” said Blue Bombers general manager Joe Mack. “We feel very fortunate to be able to trade up to do that, and we think Tyson Pencer will be a real good football player for us one day.”

Early reports surfaced that the Bombers were hoping to select highly touted defensive lineman Jabar Westerman out of Eastern Michigan at No. 3, but the B.C. Lions leapfrogged the Blue and Gold by trading up to the No. 2 spot just minutes before the Edmonton Eskimos were on the clock.

“We really liked Westerman,” added Mack. “There’s no doubt that he was a primary person that we were trying to target. We went through that scenario… if you look at the trade that occurred with Edmonton, because we had only two picks in the second round we didn’t have enough firepower to get up to No. 2. (Edmonton) traded down only two picks… obviously they’re going to have to trade down six or seven picks (with us), and that was much farther than Edmonton wanted to go. I was happy we were able to get to No. 3.”

The Bombers used their 16th-overall selection to take 6’2” 208-pound wide receiver Johnny Aprile out of Queen’s University, who will tryout at safety as well. At No. 21-overall, they took 6’5” 290-pound Angolan-born defensive end Christo Bilukidi out of Georgia State University. At No. 23, Winnipeg selected 6’1” 225-pound linebacker Rene Stephan out of Harding University before taking 6’2” 275-pound offensive lineman Jake Thomas out of Acadia University with their final selection at No. 29.

“It is hard to comprehend that I just got drafted,” said Hurst. “I am overjoyed and have waited over ten years for this moment.”