Home » News » WPS Half Marathon a Go for Sunday

WPS Half Marathon a Go for Sunday 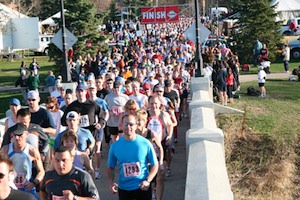 Whether the forecasted rain holds off or not, it won’t be enough to derail the Winnipeg Police Service 8th Annual Half Marathon tomorrow morning.

At 8 a.m., approximately 2,600 runners will begin at Assiniboine Park just east of the footbridge. A Canadian Forces C130 aircraft will perform a ceremonial flyover to begin the race.

The race will make its way east down Wellington Crescent before travelling through Wolseley, and then heading west through Charleswood and eventually back to Assiniboine Park to end near the duck pond.

The public can cheer on the runners at any point along the route, and also enjoy a pancake breakfast in the finisher area.

Proceeds raised from the event will go to support the Canadian Cancer Society’s Manitoba division.

WPS Half Marathon not your speed? The MS Walk is also taking place on Sunday beginning at the University of Manitoba.

← Previous: Justice Murray Sinclair to Lecture at U of W This Weekend Next: No Injuries in Two-Vehicle Crash on Portage →
Tags: Assiniboine Park | Cancer | Charity | Winnipeg Police