More Aid on the Way for Manitoba Flood Victims 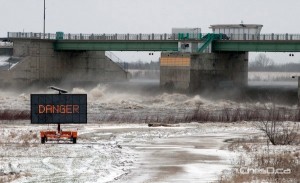 The Red River Floodway gates south of Winnipeg as seen on May 1, 2011. (STAN MILOSEVIC / MANITOBAPHOTOS.COM)

Eight new appraisers will also be added to assess flood-damaged property as the province’s flood tab climbs closer to $1 billion.

“Last year’s flood is not yet over for a lot of families,” said Infrastructure and Transportation Minister Steve Ashton. “Many Manitobans still can’t go back to their homes. This is the largest recovery effort Manitoba has taken on since 1950 and it’s going to be a multi-year process. These new staff will help keep things moving forward and join the more than 100 people already working to process claims for flood-affected families.”

More than 30,000 flood claims have been filed — triple the number of claims from the 1997 flood. So far, the province has paid out $650 million in compensation to flood-affected Manitobans.

A one-time grant for a municipal tax credit will be made available to residents trying to rebuild in Alonsa, Ochre River, Siglunes, St. Laurent, Grahamdale, Coldwell, and Lawrence. The province is also covering 90 percent of the $1.7 million cost for Brandon’s flood preparation work done in advance of the 2011 flood.