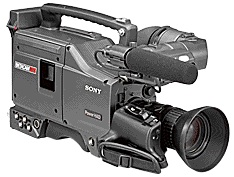 Several UVW-100 Betacams similar to this one were stolen from Canad Inns Stadium on April 29.

Some of the production equipment the Winnipeg Blue Bombers use on game days was stolen from Canad Inns Stadium last week.

In an internal e-mail, production staff say four UVW-100 Betacams were stolen overnight on April 29. Three of the cameras had lenses on them. Two ACDN10 camera power supplies were also taken.

All of the serial numbers from the lifted equipment have been reported to police, who will be checking inventory at local pawn shops.

The Blue Bombers have since added to their alarm systems within the stadium.

“We are also in the process of installing security cameras and have increased security presence overnight,” said Darren Cameron, the team’s director of communications.