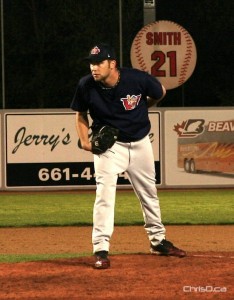 WINNIPEG — The Winnipeg Goldeyes lead off their pre-season exhibition schedule Monday night with an 8-7 loss to the St. Paul Saints in a drizzle-filled and overcast affair in front of 2,515 at Shaw Park in downtown Winnipeg.

In a complete seventh inning of work, the 22-year-old Friesen allowed no earned runs on one hit, gave up a pair of walks and added a strikeout. He threw a wild pitch that scored a runner.

“I was definitely a little nervous my first time out,” said Friesen following his professional exhibition debut. “It’s still pretty exciting to still get the opportunity to be here right now, but time will tell. Hopefully I’ll feel a little better next time.”

“I just tried to stay within myself and do what I could.”

With a current training camp lineup of 13 pitchers and 13 position players and Forney looking to keep one less than the American Association’s maximum 23-man opening day roster, it looks like there will be three pitchers among Winnipeg’s four final cuts.

The Fish continue their six-game exhibition schedule Tuesday night at Shaw Park before they face the University of Winnipeg’s new baseball program in their final home exhibition matchup on Friday.

Winnipeg’s regular season begins May 18 in Amarillo, Texas, while their home opener goes Tuesday, May 29 at 7 p.m. against the same Amarillo Sox.