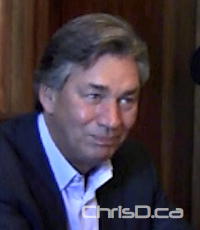 One of Manitoba’s former premiers will address the Winnipeg business community on Thursday.

Gary Doer, Canada’s Ambassador to the United States, will speak at the Winnipeg Chamber of Commerce luncheon, where he’ll focus on Canada-U.S. relations with particular focus on trade and economic issues.

Doer assumed his current role in October 2009 after more than a decade as Manitoba’s NDP premier.

The luncheon will begin at noon, followed by Doer’s address at about 12:40 p.m.