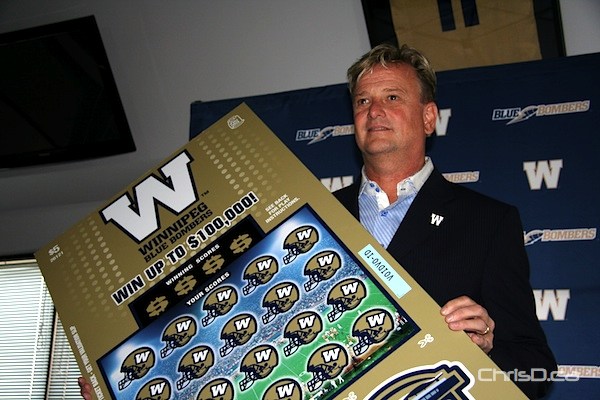 The football club on Wednesday launched the Winnipeg Blue Bomber Scratch Lottery — the first scratch and win lottery in CFL history — in partnership with Manitoba Lotteries.

“We were planning this long before we knew where we were going to be playing football this year,” said Blue Bombers president and CEO Garth Buchko. “This is about long-term sustainability and long-term good business, and this is just one of our multiple, multiple new ideas that we’ll be rolling out to generate additional revenue for the football club.”

“(Profits) will be in the hundreds and hundreds of thousands of dollars if we sell out the lottery,” Buchko added.

Revenue from ticket sales will remain with the club and go back to paying the stadium loan at Investors Group Field. Buchko said the first $4 million generated from tickets will go towards the loan.

“We’ve said right from the beginning since the stadium was being built that we need to generate multiple revenue streams and this is just one of them.”

The tickets — 750,000 in total — are on sale now at several retail locations throughout Manitoba.