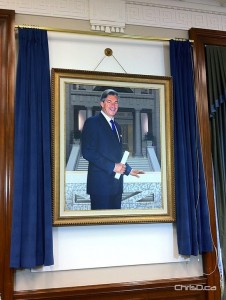 A portrait of former Manitoba Premier Gary Doer, now Canada's Ambassador to the United States, is unveiled Thursday, May 10, 2012 at the Manitoba legislature. (CHRISD.CA)

A large-scale portrait of former Manitoba Premier Gary Doer was unveiled Thursday at the legislature.

Doer served as Manitoba’s NDP premier for three terms — 1999 to 2009 — before leaving provincial politics to serve as Canada’s Ambassador to the United States.

“I should thank Danielle for my haircut,” Doer jokingly said after first seeing the portrait, referring to his hair stylist.

Doer brought wife Ginny and daughters Emily and Kate along for the unveiling.

The portrait was painted by artist Andrew Valko, who also did the work of former Premier Gary Filmon (1988-1999).