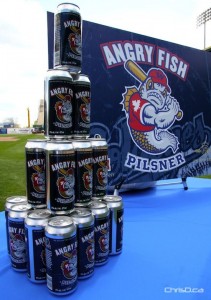 Cans of Angry Fish Pilsner on display at Shaw Park during a news conference on Friday, May 11, 2012. (DARRIN BAUMING / CHRISD.CA)

You can now drink like a Fish, and the Winnipeg Goldeyes want you to do it responsibly, while enjoying their latest branded brew.

“The Goldeyes would like to thank Fort Garry Brewing Company for their partnership with the ball club,” said Collier. “The light-tasting beer, which has been in the works for the past four years, will be available at Shaw Park, Manitoba Liquor Marts and beer vendors across Manitoba starting Friday, May 18.”

The Goldeyes are Winnipeg’s only professional sports team to serve Fort Garry products. The limited edition brew is 5.0 per cent alcohol and will be sold individually in 473 ml cans.