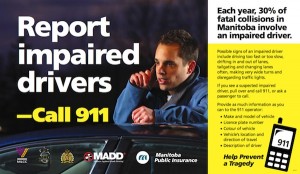 A new initiative to get impaired drivers off the streets was launched in Portage la Prairie on Monday.

Report Impaired Drivers 911 allows citizens to call 911 if they suspect an impaired driver on the roadway. Portage is the second Manitoba community to have the initiative after Brandon launched theirs last spring.

“Through RID 911, citizens can play an active role in helping to avert the heartache and tragedy caused by impaired driving,” said Bill Robinson, Assistant Commissioner and Commanding Officer of RCMP “D” Division. “The RCMP continues to work with its valued partners to increase road safety through strategic enforcement and awareness initiatives aimed at changing high risk driving behaviour.”

RID 911 will be administered by the Portage RCMP, in partnership with Manitoba Public Insurance, the Manitoba Liquor Control Commission, and MADD Canada. More than 70 communities across Canada have similar campaigns.