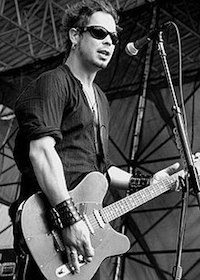 The band will play the annual volleyball festival set for July 20-21 at Maple Grove Rugby Park.

Big Wreck recently reunited to release their Albatross album earlier this year. Vocalist Ian Thornley went on to have a successful solo career in 2002 before he and fellow bandmate Brian Doherty began touring together in 2010.

Weekend long concert and festival passes for non-tournament participants can be purchased at SuperSpike.ca on Friday, May 18 at 10 a.m. They will be on sale for only $20 for a limited two-week early bird period. After June 1 they will go up to $25. All Super-Spike tournament participants receive free access for the concert series and on-site festivities.

Win your way into MTS Super-Spike 2012

Simply fill out the entry form below and correctly answer the skill testing question.

One entry per person, please. Multiple entries will not be counted. Winner must confirm receipt of their name being drawn. All personal information is handled in accordance to our Privacy Policy, and then discarded after the contest. Contest closes Friday, May 18, 2012 at 5:00 p.m. CT. Manitoba residents 18+ only.