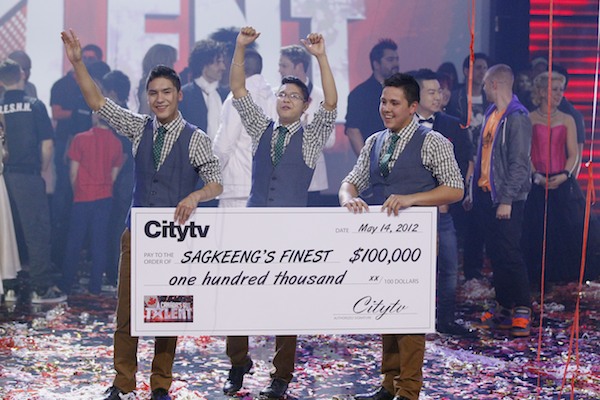 Sagkeeng's Finest are the winners of 'Canada's Got Talent.' (ROGERS MEDIA)

A dance trio from Sagkeeng First Nation are the winners of “Canada’s Got Talent” and a cool $100,000 cash.

Sagkeeng’s Finest — hailing from Fort Alexander, Manitoba — received the highest number of votes for their performance on the Citytv reality show. Besides the giant cheque, the teens also won a brand new Nissan GT-R and an all-inclusive trip to the island of Tobago, a chance to perform in a Las Vegas show, and the title of Canada’s Most Talented Act.

Vincent O’Laney, 17, and brothers Brandon, 18, and Dallas Courchene, 17, auditioned in Winnipeg back in September 2011. In Monday’s night’s live finals, Sagkeeng’s Finest performed to a mash-up of Raghav’s “Fire” and Metro Station’s “Shake It,” with a fusion of traditional clogging and tap.

“Sagkeeng’s Finest is a uniquely-Canadian talent that struck a chord with communities across the country,” said executive producer Ed Robinson. “The First Nation’s traditional dance trio are outstanding role models — not only for their community, but for all Canadian youth.”