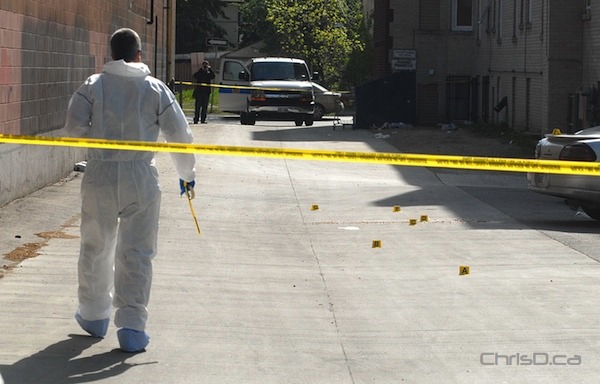 Homicide investigators work at the scene of where a man was assaulted in the 600 block of Sargent Avenue on Thursday, May 17, 2012. (STAN MILOSEVIC / MANITOBAPHOTOS.COM)

Winnipeg police are investigating the city’s 15th homicide of the year after a man was assaulted early Thursday morning.

Police were called to the 600 block of Sargent Avenue around 12:21 a.m. where they found the injured man.

He was taken to hospital in critical condition and later died.

Several evidence markers could be seen in a back alley south of Maryland Street as investigators photographed the scene.

UPDATE: A man and woman have been arrested in connection to this incident. Charges are pending.

UPDATE: Friday, May 18 — The victim has been identified as Clarence William Ross, 31, of Winnipeg. Police have charged Devin Vernon Williams-Wapash, 19, and Danyell Williams, 22, both of Winnipeg, with second-degree murder.