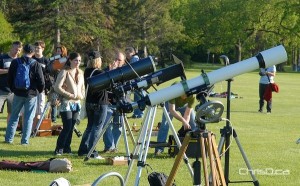 People line up their telescopes to view the solar eclipse at Assiniboine Park on Sunday, May 20, 2012. (STAN MILOSEVIC / MANITOBAPHOTOS.COM)

Sky-gazers assembled by the masses Sunday evening for a rare event only safely viewed with protective eyewear.

The partial solar eclipse was the talker at Assiniboine Park as astronomers, scientists and anyone with a fascination for the sky came together for the show.

“It’s worth it to come out here,” said Brian Stach, a member of the Royal Astronomical Society of Canada. “Even the adults here… they’re just surprised to see something like this.” 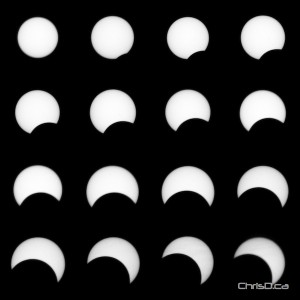 A collage of the solar eclipse as seen from Winnipeg on Sunday. (STAN MILOSEVIC / MANITOBAPHOTOS.COM)

“It’s a great way to meet people and learn about telescopes,” Stach added about joining the society.

The Manitoba Museum provided free safety glasses for anyone interested in viewing the wonder in the sky, while telescopes with solar filters were also available.

The next, larger solar eclipse will occur in 2017.