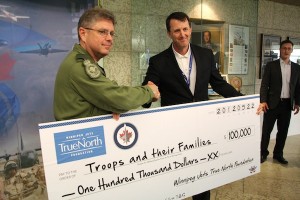 Winnipeg Jets chairman and co-owner Mark Chipman presented a cheque of $100,000 to support a number of Canadian military charities on Tuesday.

The donation is the first of several as part of a $1 million commitment from the Jets over the next decade.

“We’ve been long since had an appreciation for the work you all do,” Chipman said. “It’s very, very easy to attach what we do, which is really very insignificant — playing the game of hockey — to what you all do.”

The money will be used to fund three Canadian Forces-related causes: Soldier On, the Military Families Fund and the Air Force Heritage Fund.