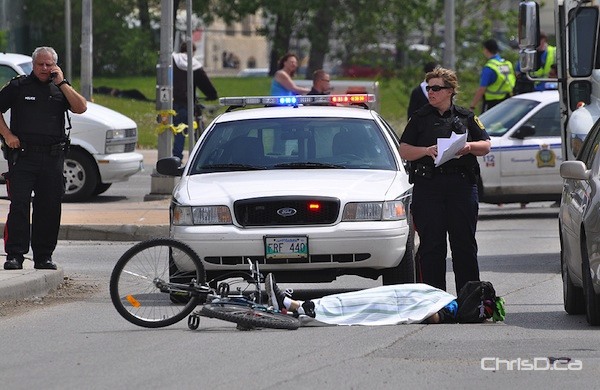 The body of a cyclist is covered as police investigate the fatal bike-vehicle accident on Higgins Avenue, Wednesday, May 23, 2012. (MAURICE BRUNEAU / CHRISD.CA)

A 35-year-old woman was killed Wednesday when she was struck by a vehicle on Higgins Avenue.

A witness on scene said the woman was cycling westbound on Higgins going through the intersection at the time.

As of noon, Winnipeg police had east and westbound Higgins between King Street and Main Street closed to traffic.

The accident comes on the same day the Manitoba government is expected to table a bill requiring cyclists to wear helmets. It’s unclear whether the woman killed was wearing a helmet or not.