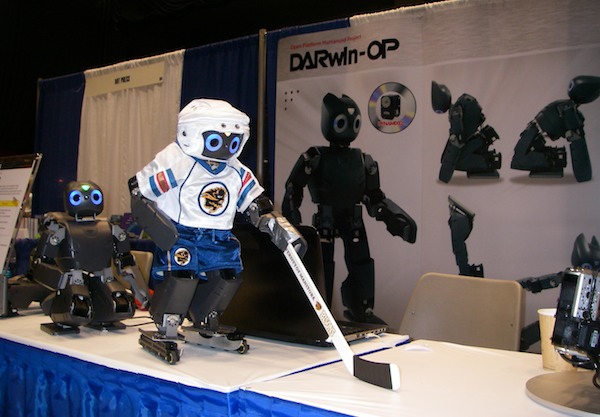 Jennifer is a robot created by students at the University of Manitoba. Her skills include the ability to play hockey, which helped her win first place in a U.S. competition. (HANDOUT)

A hockey-playing robot built by students at the University of Manitoba has come in first at a competition in St. Paul, Minnesota.

Jennifer, named after three-time Canadian Olympic gold medal hockey player Jennifer Botterill, competed in the ICRA 2012 DARwIn-OP Humanoid Application Challenge on May 12. Designed by students in the Autonomous Agents Laboratory, the robot has been featured on science TV shows for her human-like stick handling skills and ability to glide on skates.

“We are very happy to say that we won first place in face of stiff competition,” said Jacky Baltes, one of the robots creators. “Our prize included a new DARwIn-OP robot, worth about $12,000, plus software totalling about $15,000.”

The competition — with more than 1,300 participants — involved developing new applications for humanoid robots.