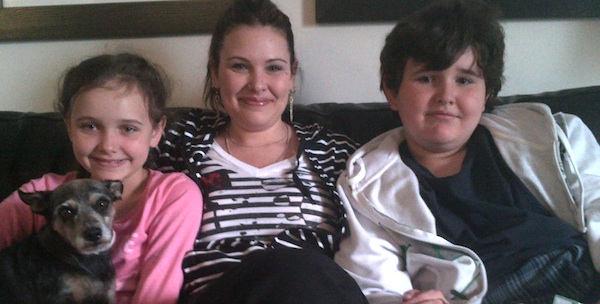 Abby and Dominic Maryk with their mother, Emily Cablek, after being reunited in Winnipeg. (WINNIPEG POLICE SERVICE / HANDOUT) 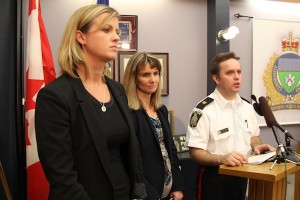 Christy Dzikowicz from the Canadian Centre for Child Protection, Det. Sgt. Shaunna Neufeld of the Winnipeg police missing persons unit, and Insp. Gord Perrier appear at a news conference on Monday, May 28, 2012 to announce the return of Dominic and Abby Maryk. (SHANE GIBSON / METRO WINNIPEG)

Two Winnipeg siblings are home after being held against their will for the past four years in Mexico.

Dominic and Abby Maryk, aged 7 and 6 at the time, were abducted by their father in August 2008 and taken out of the country. They were reported missing when their father, Kevin Maryk, didn’t return the children to their mother and Maryk’s estranged wife, Emily Cablek, following a scheduled visit.

Since then, search efforts have been ongoing by authorities and the Canadian Centre for Child Protection.

Last Friday, the children were located in a Guadalajara home, secured with surveillance cameras, barbed wire and guard dogs. The Find Foundation, a group that works to find missing persons in Mexico, along with a private investigator from Louisiana, found the children with the help of Interpol. The organization was tipped off by a nearby neighbour who recognized the Maryk children after seeing them on a Mexican television news report.

Kevin Maryk, along with accomplice Robert Groen, was arrested on May 25 — eight days after the TV report aired.

According to the Find Foundation, authorities also found weapons, drugs and child pornography when they raided the home.

On Monday, Winnipeg police said Maryk and Groen are being held in Mexico City awaiting extradition to Canada. A Canada-wide warrant remains outstanding for Cody McKay, an accomplice in the abduction and Maryk’s nephew.

Inspector Gord Perrier said the distribution of a YouTube video put out by Winnipeg police and Crime Stoppers led to a tip being generated on May 24. The video aired on Univision and local affiliates within Mexico.