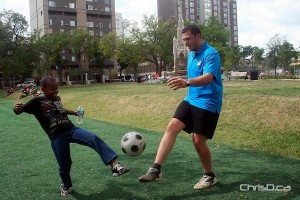 A Cadet with the Winnipeg Police Service plays soccer with a boy in Central Park on Wednesday, July 27, 2011. (HANDOUT / FILE)

“It’s great to see that soccer forces are uniting to grow the beautiful game in Winnipeg,” said Mayor Sam Katz. “WSA Winnipeg and Manitoba Major Soccer League are doing their very best to make soccer available to all young people in Winnipeg.”

WSA Winnipeg players are also running free clinics and participating in mentorship programs with inner city youth to highlight what soccer has to offer.

The soccer community is strengthening its status leading up to the 2015 Women’s World Cup, in which Winnipeg was chosen as one of the host cities.