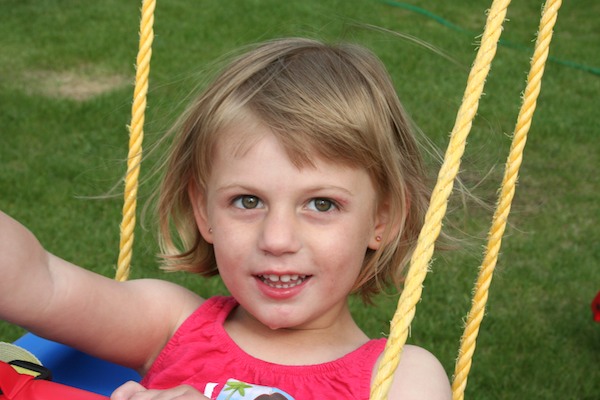 Two Winnipeg parents had their lives forever altered earlier this month when their four-year-old daughter was diagnosed with Late Infantile Batten Disease.

The rare and fatal disease begins to show signs in childhood around the ages of four to 10-years-old. Life expectancy varies, but those who suffer from it will eventually become bedridden, lose their sight, speech and motor skills.

Tara and Scott Gair have decided to fight the disease head on, which their daughter, Mackenzie, was diagnosed with on May 16.

“Eventually it will steal her eyesight and her ability to walk and talk. She will depend on us for everything,” the couple said.

Doctors have told the Gairs that Mackenzie could be blind by the age of six and will eventually have to eat through a tube.

Mackenzie started showing signs of the disease at the age of three, when the Gairs noticed she wasn’t speaking as much as her peers. After being referred to a speech therapist, Mackenzie had her first absence seizure. Several more seizures would follow in the next few weeks — as many as 25 at a time.

After numerous neurological and blood tests, the devastating diagnosis was given to the Gairs.

To help the family with the challenges they face ahead, a fundraising social has been organized for June 28. “Mackenzie’s Hope Fundraiser” will be held inside the Tijuana Yacht Club at Canad Inns Polo Park. Ticket information is available at MackenziesHope.com.

Donations can also be made at any Crosstown Civic Credit Union in Winnipeg under “Mackenzie Gair’s Hope.”

← Previous: 'Big Brother Canada' Coming to the Slice Network Next: Donate to Harvest's 'Tin for the Bin' This Summer →
Tags: Health