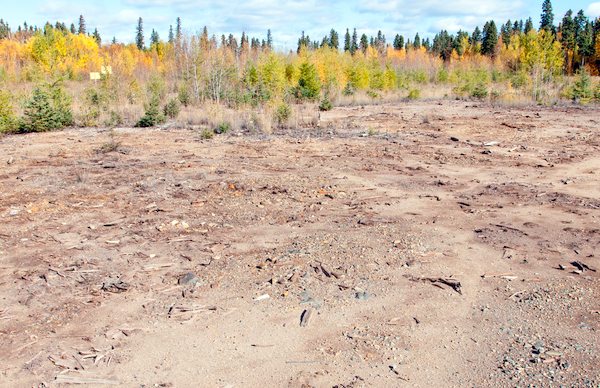 Grass is cleared from Grass River Park in September 2011 at the Spruce Point mine site. (WILDERNESS COMMITTEE)

A report meant to educate Manitobans on the impacts of mining in the province’s parks has been released.

“Manitobans get the shaft when it comes to provincial parks,” said Eric Reder, campaign director for the Wilderness Committee, the organization that released the report. “Parks in Manitoba, unlike most jurisdictions in the world, are not protected, and mining is causing park destruction.”

The report, titled Ban Mining in Manitoba Parks (PDF, 3.1 MB), includes investigative reports of park destruction from mining and originally mapped images. The report specifically highlights the decommissioned Spruce Point Mine, operated by Hudbay Minerals in the 1980s, which the committee calls “a messy scar on the land” in Grass River Provincial Park.

“The eeriest thing I’ve ever seen in the Manitoba wilderness is the obviously toxic pond at the Spruce Point Mine site, which bubbles constantly and where no vegetation grows,” Reder added.

“The Wilderness Committee has set an ambitious goal for Manitoba — to protect 20% of our province by the year 2020,” the report states.