Campaign Launched to Raise $1M in 30 Days for Assiniboine Park 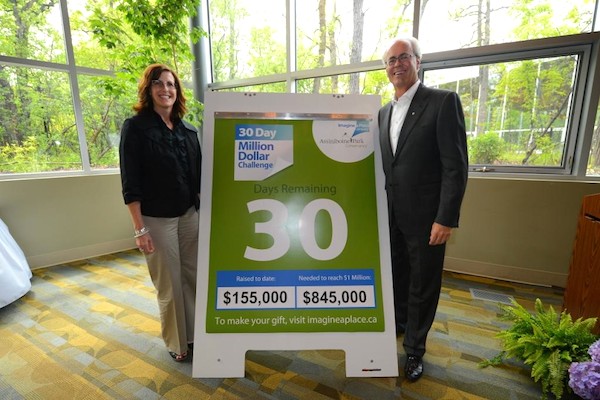 Assiniboine Park Conservancy president and CEO Margaret Redmond and Hartley Richardson, the Conservancy's board chair, at an announcement Friday, June 1, 2012 to launch the public initiative to raise $1 million in 30 days for park redevelopment as part of the Imagine a Place campaign. (HANDOUT)

A 30-day campaign to raise $1 million towards the Assiniboine Park Conservancy’s Imagine a Place fundraising initiative was launched Friday.

Throughout the month of June, all public donations will be matched dollar-for-dollar up to $500,000.

“This is certainly an ambitious goal but we’re confident the community will be there for us,” said Conservancy president and CEO Margaret Redmond. “We know how much Assiniboine Park means to the hundreds of thousands of people that visit every year and we need everyone’s support to make this a world-class destination like no other.”

Donations can be made at ImagineAPlace.ca, by calling (204) 927-8080 or in-person at the APC’s Pavilion office at Assiniboine Park. Those attending Party for the Park will also have the opportunity to make a donation.