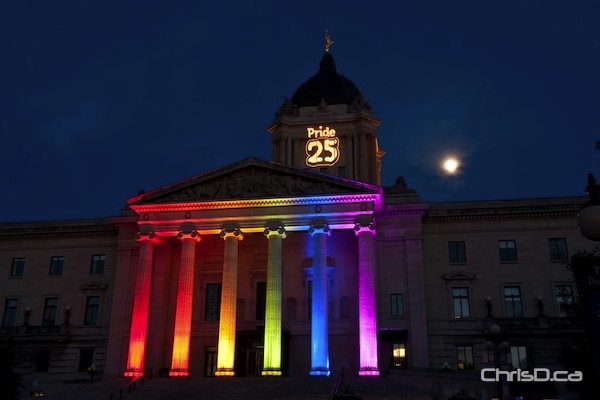 Coloured lights illuminate the Manitoba legislature on Friday, June 1, 2012 in celebration of the Winnipeg Pride festival. The building will be re-lit on Saturday night. (TED GRANT / CHRISD.CA) 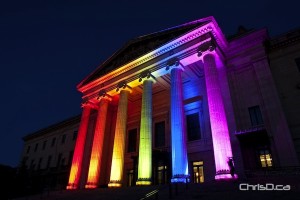 The columns of the Manitoba legislature are lit up in celebration of the Pride Winnipeg festival on Friday. (TED GRANT / CHRISD.CA)

The Manitoba legislature was lit up in a rainbow of colours Friday night in celebration of the Pride Winnipeg festival.

At 9 p.m., members of the queer community and their supporters gathered at Memorial Park to watch as the front columns of the legislature were lit up, with the Pride 25 logo appearing on the dome of the building, just beneath the Golden Boy. 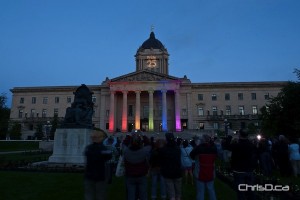 People gather on the grounds of the Manitoba legislature Friday to see the rainbow of coloured lights. (TED GRANT / CHRISD.CA)

“This is one of the most significant things we are doing to celebrate the occasion of our 25th anniversary,” said Barb Burkowski, chair of Pride Winnipeg. “What really started the Pride movement in Winnipeg was the passing of a piece of legislation that included protection against discrimination based on sexual orientation in Manitoba’s Human Rights Code — so what better way to symbolically mark the occasion than by lighting up the building where these protections were drafted and became law.”

The legislature will be re-lit Saturday evening, leading into Pride Day activities on Sunday, June 3.