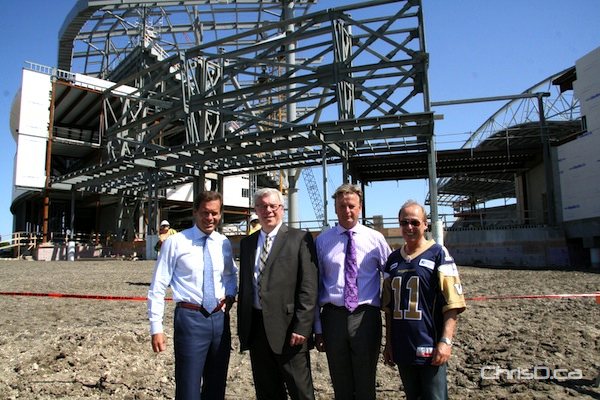 As far as CFL Commissioner Mark Cohon is concerned, the Winnipeg Blue Bombers’ stadium is on schedule to open by mid-September, but construction officials are saying otherwise.

Cohon was in Winnipeg Monday for a tour of Investors Group Field at the University of Manitoba, where he said he’s been told construction is still on schedule to meet the September 21 deadline, or September 9 in a best case scenario.

An official with Stuart Olson Dominion Construction spoke to media gathered to say recent heavy rain and high winds have forced them to try and make up some lost time on the project. Longer hours and more man power will hopefully speed up the process, said the company’s VP, Rick Graumann.

Reporters also asked Cohon about the possibility the city will host the 2014 Grey Cup. The commissioner said its Board of Governors will meet to discuss which city will end up hosting the big game, but couldn’t say whether it would be a western or eastern division team.

“We want to get it here (in Winnipeg) soon after the stadium opens, but there’s no commitment yet on 2014,” Cohon said.