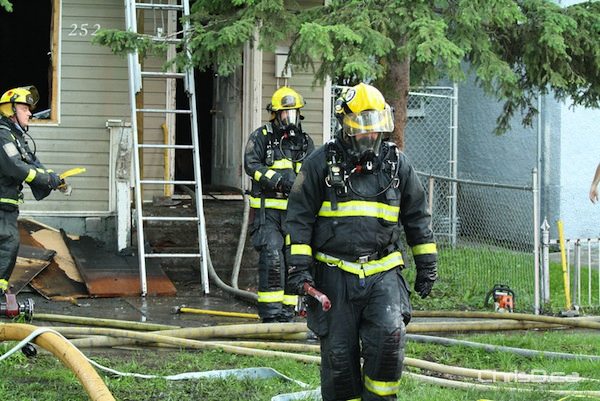 Firefighters put out two separate fires at the same home in the 200 block of Pritchard Avenue on Sunday, June 3, 2012. (HOWARD WONG PHOTO)

Firefighters were called on twice to extinguish a fire at the same residence on Sunday.

The home in the 200 block of Pritchard Avenue, reported to be abandoned, became engulfed in flames at around 2 p.m.

However, firefighters returned just before 8 p.m. to put out a second fire.

The cause of the fires remain under investigation.

UPDATE: Winnipeg police arrested three teen boys, between the ages of 13-14, in the area of Charles Street and Pritchard Avenue Sunday evening. Police say the teens broke into the house and deliberately set the fire. All three were taken into custody.

← Previous: Goldeyes' Season Off to a Stellar Start Next: CONTEST: Win Passes to the Red River Ex →
Tags: Fire