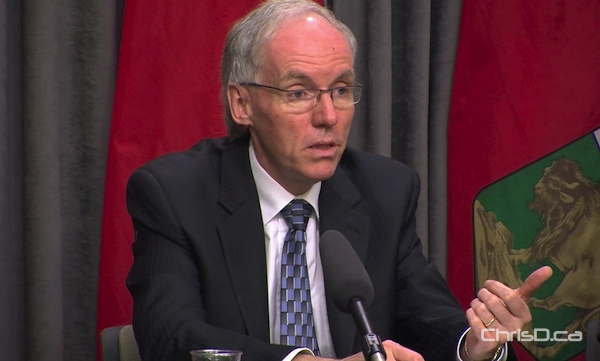 Steve Ashton, minister responsible for emergency measures, speaks during a news conference at the Manitoba legislature on Thursday, June 7, 2012. (CHRISD.CA)

The Manitoba government said Thursday that most of the people affected by last spring’s flood have received an initial compensation payment.

Infrastructure and Transportation Minister Steve Ashton said 65 percent of applicants have received advanced or final payments totalling $66.4 million, and $300 million paid out under the disaster financial assistance program to more than 50 percent of residents.

“Cleanup started this spring as the threat of further flood damage from high water ended. The cost of compensation is expected to be three times what we spent fighting the flood last year,” Ashton said.

Four more property assessors will be hired to speed up the appraisal process for flood-impacted properties around Lake Manitoba, and six new commissioners have been added to help with the claims appeals process.

Ashton said flood costs continue to grow and could top $1 billion from the current $880 million incurred already by the province.

On Wednesday, hundreds of people affected by last year’s flood held a meeting to discuss their options for a class-action lawsuit against the province seeking further compensation.