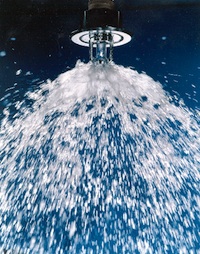 Unless you live in an apartment building, your home likely doesn’t have a fire sprinkler system installed. The Winnipeg Fire Paramedic Service is hoping to change that.

On Monday, the WFPS held a demonstration to show how quickly a single room can burn without a sprinkler installed. In under two minutes, the contents and walls of the room were completely engulfed by flames, leaving nothing left but charred remains.

Sean Pearce of the Canadian Automatic Sprinkler Association said installing both smoke alarms and a fire sprinkler system reduces the risk of death in a home fire by 82 percent.

“Only the sprinkler closest to the fire will activate, spraying water directly on the fire. 90 percent of fires are contained by the operation of just one sprinkler,” Pearce said.

The cost to install a sprinkler system in a home is about $3,000.

← Previous: Blue Bombers Flip-Flop on Cowbell Policy Next: 'Food We Eat' Spotlighted in U of M's Speaker Series →
Tags: City of Winnipeg | Fire