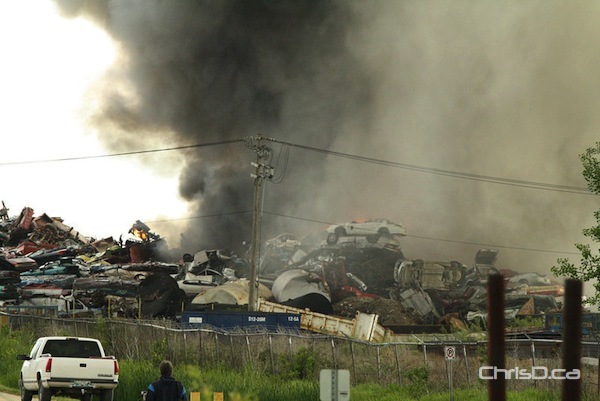 Smoke billows out from a fire at General Scrap in the RM of Springfield on Tuesday, June 12, 2012. (HOWARD WONG PHOTO)

A scrap pile at General Scrap, located at 135 Bismarck Street just off Springfield Road, went up in flames at about 5 p.m.

Large plumes of black smoke could be seen for several kilometres away as municipal fire crews attended the scene.

By late Tuesday, water bombers were added to the arsenal of equipment being used to fight the fire.

UPDATE: Wednesday, June 13 — The Office of the Fire Commissioner has determined the cause of the fire to be accidental. Hot shards of metal from the shredding process landing near other combustible items in the yard sparked the blaze. Damage is estimated at $300,000.

← Previous: VIDEO: Getting Dirty in the Fight Against MS Next: 'Recycle Everywhere' Partners with City, Province →
Tags: Fire