MLAs and ministers gather on the steps of the Manitoba legislature on Monday, June 18, 2012 prior to a trolley tour organized by the Downtown Winnipeg BIZ. (STAN MILOSEVIC / CHRISD.CA) 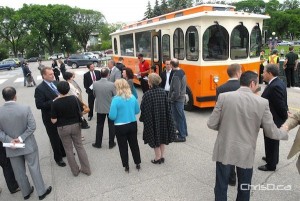 MLAs and ministers prepare to go on a trolley tour of Winnipeg’s downtown on Monday. (STAN MILOSEVIC / CHRISD.CA)

Manitoba MLAs toured the city’s downtown in a way they likely have never done before on Monday.

The Downtown Winnipeg BIZ took government members on a trolley tour to show off the inner-workings of the city centre and the Downtown BIZ this morning. Following the tour, MLAs and ministers participated in an open discussion with members of the Downtown BIZ board to talk about downtown and the role of the BIZ.

“During this tour, the Downtown BIZ will have an opportunity to engage and get input from the premier’s cabinet and the province about their vision for our downtown, in relation to the needs of their neighbourhood stakeholders of whom they represent,” said Stefano Grande, executive director of the Downtown BIZ. “Community consultation and a tour of the downtown area will hopefully synergize our collective efforts into making the downtown area an even more vibrant and positive community to live, play and participate.”

The first pitstop was at the Manitoba legislature at 11:30 a.m. The roughly one-hour tour wrapped up at MTS Centre.