Home » Sports » Stegall to Be Inducted into Football Hall of Fame

Stegall to Be Inducted into Football Hall of Fame 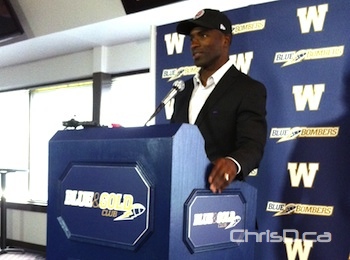 The Turtle Man is headed to the Hall, and he’ll accept the honour in the same city where he made it all happen.

Winnipeg Blue Bombers legend Milt Stegall will be enshrined in the Canadian Football Hall of Fame later this year at the 2012 Induction weekend to be held in Winnipeg November 1-3.

“Winnipeg hosted the 2009 Induction and we are extremely fortunate to work with them again,” said Mark DeNobile, executive director of the Canadian Football Hall of Fame and Museum based in Hamilton, Ont.

“We know that this event will be a resounding success and we’re looking forward to celebrating the members of the 2012 Hall of Fame class,” said Blue Bombers president and CEO Garth Buchko. “We invite everyone who loves this great league and its proud tradition to join us here in Winnipeg to take part in this celebration.”

The Hall of Fame game will take place November 3 as the Winnipeg Blue Bombers host Montreal at Canad Inns Stadium.

The Hall is home to the busts of 258 enshrinees and more than 30,000 Canadian football artefacts, ranging from equipment and trophies to photos and videos.