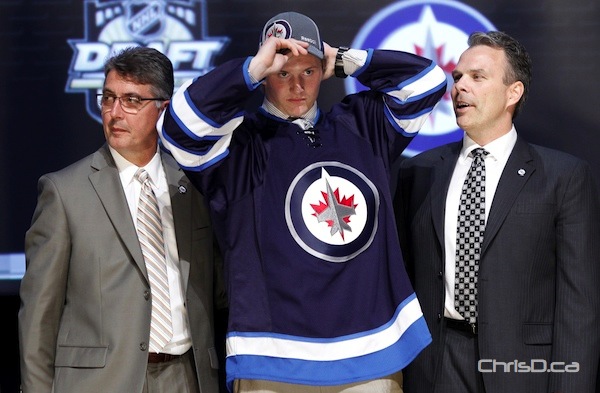 Jacob Trouba, dressed in his new jersey, adjusts his cap after being picked by the Winnipeg Jets in the first round of the NHL Draft in Pittsburgh, Pennsylvania on Friday, June 22, 2012. (JASON COHN / REUTERS)

With only a pair of forwards off the board by the time it was the Winnipeg Jets’ turn to select ninth overall at the 2012 NHL Draft on Friday night, general manager Kevin Cheveldayoff decided to pass on the handful of talented forwards available, electing instead to select imposing defenceman Jacob Trouba.

Trouba, a 6’2″, 194-pound 18-year-old out of the U.S. National Development Team, is a two-way defenceman with a big shot, a big body, and elite physical skills. What’s intriguing about Trouba is that he may not be fully grown yet, touting genes from a father who stands 6’8″.

The Auburn Hills, Michigan-native captained the 2010 American U-17 team who played their tournament in Winnipeg, and was an alternate captain and the youngest player on the United States’ 2012 IIHF World Junior Championship gold medal winning team.

Trouba is still a year or two from cracking an NHL lineup, and has committed to play the upcoming season for the University of Michigan Wolverines.