Home » News » Buck’s BBQ Chips Tasty for a Charitable Cause

Buck’s BBQ Chips Tasty for a Charitable Cause 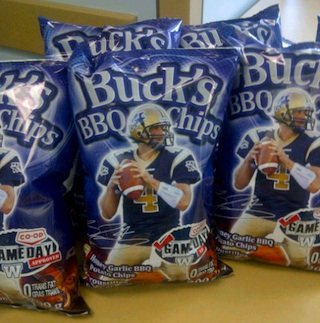 Winnipeg Blue Bombers quarterback Buck Pierce is scoring points off the field with the launch of his own line of potato chips.

Buck’s BBQ Chips were unveiled Friday and are part of a one-year pilot partnership with Co-op. A second Bombers-branded product will be released later this summer. A portion of the sales will go towards the Children’s Hospital Foundation of Manitoba.

More than 15,000 bags of Buck’s BBQ Chips are now available at Co-op Food and Market Place stores and C-stores throughout Manitoba. Another 50,000 bags are ready to be filled depending on customer demand.

Pierce will be signing autographs to promote the chips at the Co-op’s Charleswood Gas Bar and Convenience Store, 3425 Roblin Boulevard, on July 10 from 3 p.m. to 6 p.m.