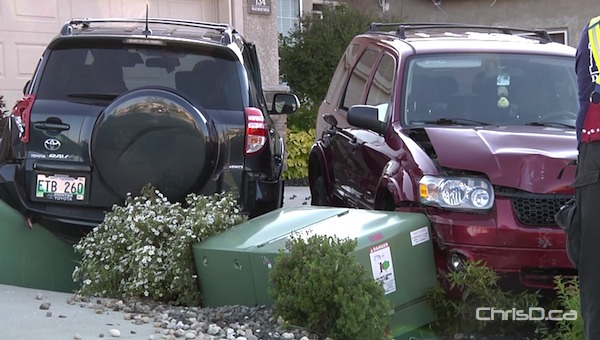 A Ford Escape (right) rests against a hydro pedestal in River Park South after crashing into at least one vehicle and driving over several lawns on Sunday, June 24, 2012. No one was injured. (WPGCAMERAMAN / CHRISD.CA) 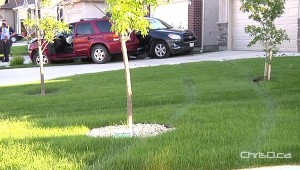 Tire tracks are seen near where an SUV lost control on Sunday. (WPGCAMERAMAN / CHRISD.CA)

No one was injured Sunday after an SUV lost control and drove over several front yards in River Park South before crashing into a hydro box.

The accident happened shortly after 7 p.m. in the 100 block of Vadeboncoeur Drive.

Witnesses say the Ford Escape took a corner at a high rate of speed before crashing into a parked car and eventually striking two hydro pedestals. 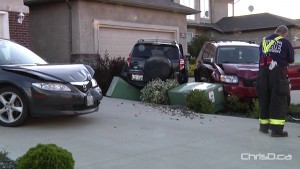 A damaged Mazda sits on a driveway after being struck by an SUV on Vadeboncoeur Drive. (WPGCAMERAMAN / CHRISD.CA)

The female driver of the vehicle didn’t suffer any injuries.

Manitoba Hydro attended the scene to turn off power to the boxes before removing the vehicles.

The residential area was swarming with children at the time of the crash.