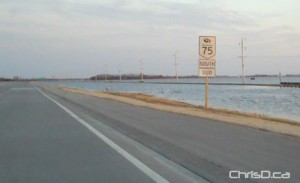 Work is underway by the province to significantly upgrade portions of Highway 75.

The Manitoba government said Thursday work has already started on the northbound lanes in Morris, including new concrete pavement, curbing, sidewalks, lighting, enhanced drainage, as well as lane improvements for trucks and other large vehicles. The project should be completed by this fall if the weather remains favourable.

A hydraulic study and assessment of the Red River, including river flows near Morris, is also being done to help determine the impact of potential flood protection works in the area. It should be completed by the summer of 2013.

The highway at the Emerson/Pembina international border crossing will see improvements to safety and traffic flow. Work on the southbound lanes will begin July 3 and last until about the end of September. The project includes construction of a dedicated, southbound commercial truck lane and the addition of concrete medians, traffic signals and new lighting at the Emerson/Pembina crossing. To help reduce traffic congestion, no work is planned on weekends.

The province is spending $589 million this year on infrastructure as part of its $4 billion commitment over the next 10 years for similar projects.