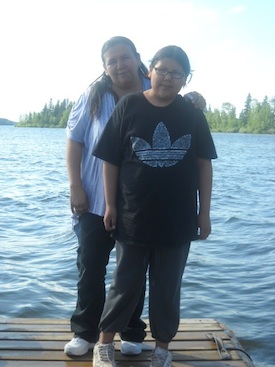 An RCMP Island Lake detachment clerk from Garden Hill is being credited with rescuing two children who fell into the water.

Melody Harper had the day off on June 24 when she noticed a group of children on a rock near the water’s edge while driving by. She then noticed one of the children fall into he water. With her 12-year-old daughter, Kalvina, with her, the two jumped into action.

Harper raced to where the child had fallen in and saw that another child was also in the water — both floating lifeless and face down. Harper gave her cell phone to her daughter to call for help and jumped in the water towards the children, aged three and four. She reached the four-year-old boy first and brought him to shore before going back to retrieve the three-year-old boy.

The four-year-old became conscious and alert, but the three-year-old was not breathing. Harper administered artificial resuscitation on the boy until paramedics arrived.

The four-year-old was cared for and released from the local nursing station, while the three-year-old was airlifted to Winnipeg, where he has since been released.

RCMP say it’s believed the children had wandered off from family members.