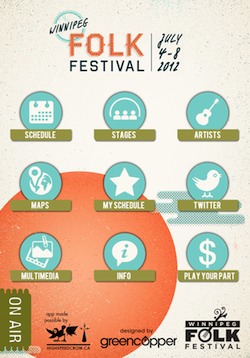 Winnipeg Folk Festival fans can now keep tabs on their favourite artists while roaming the grounds of Birds Hill Park.

A smartphone app has been launched by the festival for iPad and Android devices. New features this year include a grid-style schedule that mirrors the familiar look of the festival’s printed program book, automatic pop-up schedule reminders for “favourited” concerts and workshops, and un-obtrusive, over-the-air, updates.

The Folk Festival’s free app — also available for all iOS devices — saw a 50 percent increase in its user base in 2011.

The app was developed by Montreal-based Greencopper.