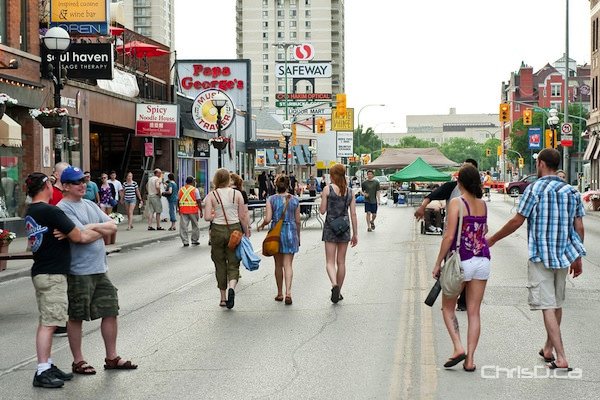 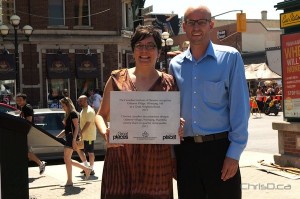 City councillor Jenny Gerbasi and Donovan Toews of the Canadian Institute of Planners during the plaque ceremony in Osborne Village on Sunday, July 1, 2012. (TED GRANT / CHRISD.CA)

Osborne Village was honoured Sunday by the Canadian Institute of Planners as Canada’s Great Neighbourhood for 2012.

The trendy Winnipeg neighbourhood won the distinction in April as based on popular vote and a CIP panel decision. Osborne was a finalist along with other destinations country-wide in the Great Places im Canada contest.

Donovan Toews of the CIP presented a plaque during a ceremony at the Gas Station Theatre. Fort Rouge-East Fort Garry councillor Jenny Gerbasi accepted the plaque on behalf of the city.

“We are thrilled that Osborne Village has been nationally recognized as Canada’s Great Neighbourhood,” Gerbasi said. “This Great Places Canada award will let people from across the globe know what Winnipeggers have always known — that Osborne Village is a place you just have to visit. With eclectic eateries, funky shops, a vibrant arts scene, and strong sense of community spirit, there is something for everyone in Osborne Village.”

A permanent Osborne Village location for the plaque will be determined at a later date.