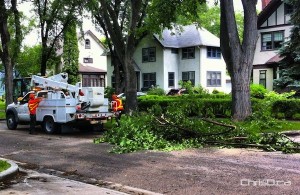 Forestry crews were out across Winnipeg Wednesday after a storm tore through the city earlier in the day.

Manitoba Hydro was also reporting several power outages to thousands of residents. On their Twitter page (@ManitobaHydro), Hydro said a lightning strike to the Frobisher Station was suspected in the outage to 1,291 customers in St. Vital. More than 15,000 customers in St. Boniface and Fort Garry experienced outages as well — also said to be lightning-related.

By 2:30 p.m., the majority of residents had power restored.