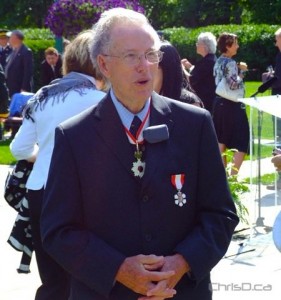 Former Winnipeg mayor Bill Norrie passed away on Friday. He was 83.

“I am deeply saddened by the death of Bill Norrie,” Mayor Sam Katz said in a statement.

“Bill made a phenomenal contribution to the community and his dedication to the City of Winnipeg is without question. Bill was very much embraced by the members of the community he served so well.”

David Barnard, president and vice-chancellor of the University of Manitoba, also released a statement.

“We are all saddened by the death of Bill Norrie,” Barnard said. “He served this community, our province and our university with intelligence, compassion and dignity.”

Norrie graduated from the U of M’s Faculty of Law in 1955. While attending law school he was president of the university students’ union and was also named a Rhodes Scholar.

In 2010, the U of M designated a popular pedestrian corridor near the Engineering Building the William and Helen Norrie Walkway.

A book of condolences will remain at City Hall until city council’s meeting on July 18, or can be signed digitally at Winnipeg.ca. Flags at City Hall and city facilities will remain lowered until sunset the day of the memorial service, July 11.