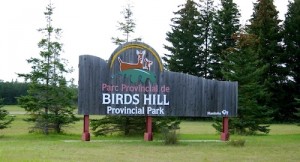 The Manitoba government is sprucing up Birds Hill Provincial Park to benefit visitors who attend the Winnipeg Folk Festival each year.

Jennifer Howard, acting minister of conservation and water stewardship, announced on Saturday the province will spend $22 million over the next five years to make improvements to electrical and lighting, foot paths, install shade structures, and plant trees throughout the festival site. More than $650,000 will be invested in capital upgrades to the park over the next two years.

“We’re making these upgrades a priority to benefit park visitors as well as people attending the Winnipeg Folk Festival,” Howard said. “Some of this work is already underway and is a direct benefit to the festival’s Staging the Future Capital Campaign.”

The park’s campground will also be expanded to include 100 new, fully serviced campsites, modern washrooms and new play areas. Visitors who frequent the beach will see the area expanded, including the lake. Beach amenities will include new concessions, new beach volleyball and tennis courts, additional picnic areas, pathway connections and beach washrooms.

Upgrades to roadways, entrance gates, buildings and a new visitor centre round out the list of improvements.