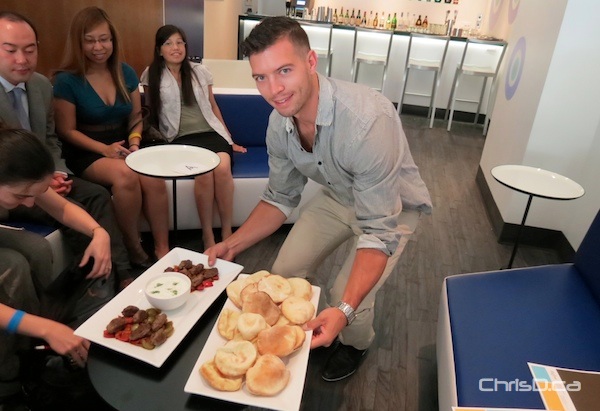 Kelvin Peters, general manager of Arkadash Bistro and Lounge on Portage Avenue, serves up an array of menu items for local media during a food tour organized by the Downtown Winnipeg BIZ on Tuesday, July 17, 2012. (VINCENT LEE / CHRISD.CA) 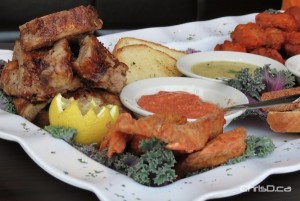 Members of the media were invited by the Downtown Winnipeg BIZ on Tuesday to tour and taste samples from five restaurants within the downtown area in the first “Let’s Do Lunch Downtown” tour. The restaurants were 12 Resto, Arkadash Bistro and Lounge, Lobby on York’s Modern Steak and Seafood, Pony Corral Restaurant and Bar, and Rudy’s Eat and Drink.

12 Resto
12 Resto Bar is located on the 12th floor of the Radisson Hotel in downtown Winnipeg. The first thing that is noticed stepping out of the elevator is the spectacular view of the city. With the restaurant being part of the hotel for 10 years, it had recently undergone renovations that opened up the entire restaurant.

Featured was the 12 Resto Burger, described on the menu as “a hand-formed lean ground beef burger, lettuce, tomato, onions with harissa mayo and Dijon mustard on a crispy bun”. The burger is a slider (mini-burger) that has just the right ratio of crispiness to the bun relative to the moistness of the beef. The vegetables topped with the Dijon mustard add a nice flavourful kick to the tastebuds and was quite enjoyable.

The restaurant’s pickerel comes directly from Lake Winnipeg, and was presented in a tomato basil pesto sauce. The pickerel cheeks were quite soft and had a unique flavour in the sauce that allowed it to not taste fishy.

“The pickerel cheeks are Bobby Hull’s favourite, every time he comes in we make sure we have it,” said assistant food and beverage duty manager Kelly Pickard.

Arkadash Bistro and Lounge
Stepping into the restaurant, the interior has a very modern and fresh feel to it as the walls are a pleasant hue of white with splashes of purple. The renovations are a huge contrast to the chocolate shop that used to occupy the space. This is currently its seventh week in operation and is still new to the Portage Avenue scene. The restaurant specializes in Moroccan, Middle Eastern, Turkish, Italian and south of France Mediterranean regional cuisine infused with Manitoba products.

“We commit to the local aspect of sourcing everything from Manitoba,” said general manager Kelvin Peters.

Lobby on York
Despite being hidden by hotel construction on the outside, the Lobby on York is a place to enjoy some drinks in their lounge, $1 oysters on certain days, and a great meal. The interior has a very unique kelp fishing net used very stylistically as dividers for some of its customers. The rotunda holds 80 people, with a private room that can seat 180.

The highlight of the three items was the pulled duck quesadilla confit as it was rich but not heavy, as the brie cheese and bell peppers complemented the duck taste.

Pony Corral
The Pony Corral downtown has a very unique theme to it with a stage setup with Las Vegas-style curtains behind the bar for live bands and entertainment on Friday and Saturday (not until September). During Hockey season, they offer shuttle service to and from MTS Centre called “The Pony Express.”

A delicious combination of chicken wings were served, along with their famous ribs, batter-fried shrimp, garlic bread, and chicken fingers. The chicken souvlaki is also pretty good.

There are many things to try at Rudy’s, such as the kettle chips with onion dip for as an appetizer. The steak is cooked beautifully, as even when sliced the juice is retained within the meat. One highlight at this restaurant is the multitude of drinks available to enjoy on a hot summer patio day. Definitely try a summer treat called the “slosh puppies,” a twist on slush puppies with just the right amount of alcohol.

Rudy’s has also partnered up with a designated driver program, which assists customers in getting home safely at a discounted rate.