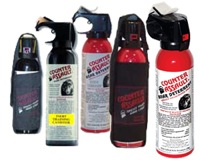 Bear spray was found in the home.

Police have seized numerous weapons after a raid on a West End home.

Winnipeg police said they raided a home in the 400 block of Agnes Street on Thursday around 12:30 p.m. There, they seized two sawed-off rifles, bear spray, hundreds of rounds of ammunition, other weapons and a stolen cash register.

Christian Abraham Boyd, 21, Devvin James Worthington, 20 and a woman, 20, have  been charged with numerous firearm offences. While Boyd and Worthington were detained, the woman was released on a promise to appear.