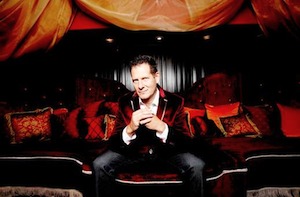 Winnipeg folk/jazz singer-songwriter Süss is scheduled as an opening act.

Barnes will be accompanying himself on the piano and feature songs from his 2011 disc Domesticated, gems from the American Standards Songbook, some R&B chestnuts and old Nylons favourites.

Tickets are $15 in advance at the WECC, Ticketmaster, Music Trader, and Winnipeg Folk Festival Music Store, or $20 at the door.