0-4 is No More for Blue Bombers 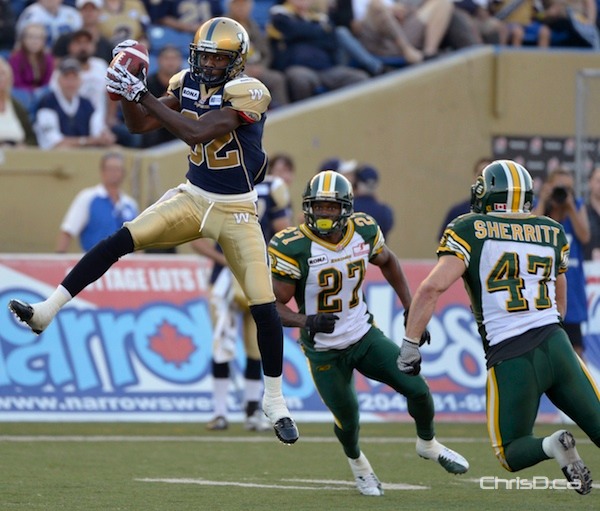 WINNIPEG — Sometimes you need to be lucky to be good, and the Winnipeg Blue Bombers were just good enough on Thursday night, edging the Edmonton Eskimos 23-22 to capture their first win of the season.

“We battled through a ton of early adversity,” said Bombers quarterback Alex Brink following his first win as Winnipeg’s starting pivot. “That was a tough second quarter for us. We came back at the end of the second quarter and put a couple drives together, and then in the fourth quarter I thought we really handled the game well.”

Trailing 14-4 with just seconds remaining in the first half, Brink fired two quick passes to drive Winnipeg for their first major of the game. 22-year-old rookie wide receiver Chris Matthews, who led the entire CFL in receiving yards coming into the game, battled Eskimo defensive back Ronnie Prude for position on a jump ball and pulled down a 40-yard pass with no time on the clock to make it 14-11 at the break.

Quarterback Steven Jyles capped the Eskimos’ opening drive of the second half with a 47-yard touchdown strike to Fred Stamps to increase Edmonton’s lead to 10.

And then the Bombers found their first bit of fortune.

As a Mike Renaud punt was blocked by Edmonton, it deflected off another Eskimo before being recovered by Jeremy McGee to keep Winnipeg’s drive alive.

The result was a sustained 10-play, 73-yard drive capped by running back Chad Simpson’s first career CFL touchdown from 4 yards out.

Early in the fourth, the Eskimos decided to concede a safety while pinned in their own end to make it a 21-20 Edmonton advantage — and it proved to be a costly mistake.

As Edmonton drove in the final minute, edging in on field goal territory for a last-second victory, rookie defensive lineman Jake Thomas forced a fumble on a scrambling Jyles that was recovered by Jovon Johnson to essentially end the game.

“I was just running to the ball and I just got lucky,” said the 21-year-old Thomas of what is likely the biggest football play of his young career. “It works every now and then,” added the Acadia University product of getting a hand on the ball with the game on the line.

It was the Canadian’s first career professional start.

“We had an effort play at the end to strip the ball out,” said Bombers head coach Paul LaPolice. “We didn’t play great tonight. We made some mistakes, but we can play with anybody in the league. You’ve got to believe it. You’ve got to do it. We’ll work to get better this week.”

Following four-straight road losses to start 2012, a loud crowd of 29,533 took in Winnipeg’s home opener at Canad Inns Stadium, making it a franchise record-tying eighth-consecutive regular season sellout — a record dating back to 1953.