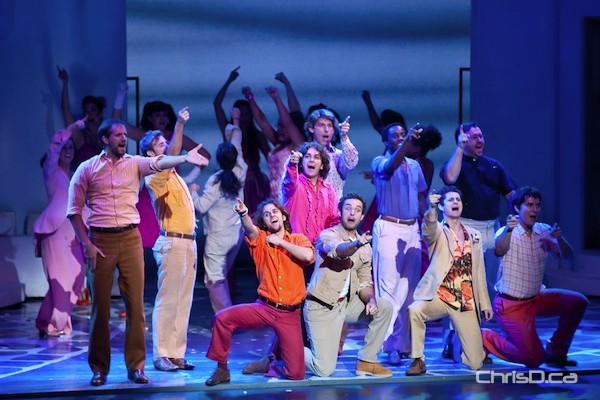 The touring production of “Mamma Mia!” is performed at the Centennial Concert Hall in Winnipeg on Saturday, July 28, 2012. (TED GRANT / CHRISD.CA) 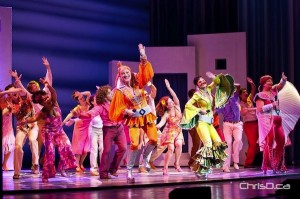 Mamma Mia!, here we go again, my, my, have Winnipeggers missed you.

The touring production of “Mamma Mia!” is back at the Centennial Concert Hall for three shows this weekend — wrapping up this afternoon.

The musical’s story takes place on a Greek island, where a young girl named Sophie (played by Chloe Tucker) is about to be wed. In wanting to have her father walk her down the aisle, she invites him to the wedding. The only problem is that she doesn’t know who her father is, and invites three men that she suspects to be her father to the wedding. Naturally, chaos ensues.

It’s a fun production, and with a cast full of vibrant energy. In fact, it’s the same cast from two years ago that came to Winnipeg — with the exception of Christian Whelan, who plays Sam Carmichael. In comparison to previous versions of this show, there was more physical comedy, and the audience laughed hard at bits of adult-related humour and sexual innuendo. One audience member who had previously seen the production in Toronto said that it’s a lot racier than she remembers it. Even the choreography was more sexually charged than their previous visit to the city. The audience responded really well to the hilarious rendition of “Take a Chance on Me,” and rose to their feet during the “Waterloo” finale at times feeling more like a concert than musical. Special mention goes to Kaye Tuckerman with her performance of “Winner Takes It All,” as it was emotionally moving vocally.

Out of curiosity, I looked around the audience expecting the majority to be baby boomers. There were a lot — some of whom have seen this particular musical more than once. The surprising part was the number of audience members that were younger — some who came because they had seen and liked the movie version of “Mamma Mia!” starring Pierce Brosnan and Meryl Streep.

Overall, “Mamma Mia!” was a very enjoyable performance, and a must-see, if you enjoy grooving to the tunes of ABBA.

A final performance will run at 1 p.m. Tickets are available at Ticketmaster.