Bombers Struggle in Loss to Alouettes 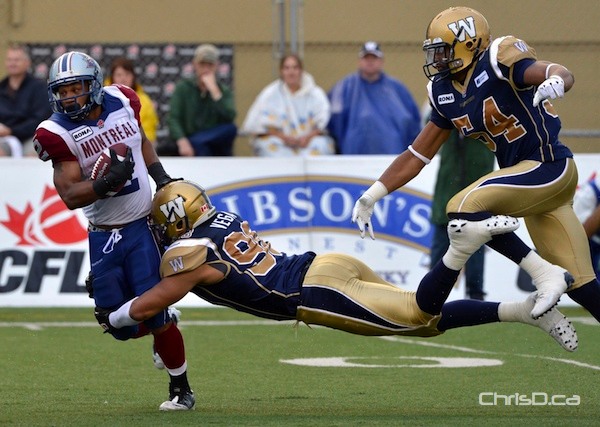 Montreal Alouettes’ Brandon Whitaker (L) is tackled by Winnipeg Blue Bombers’ Jason Vega (C) and Kenny Mainor during the first half of their game at Canad Inns Stadium in Winnipeg on Friday, August 3, 2012. (FRED GREENSLADE / REUTERS)

WINNIPEG — Slow starts continue to be the Achilles heel of the Winnipeg Blue Bombers, and while the heavy rain just before kickoff definitely put a damper on things, the team recorded it’s ninth-consecutive regular season sellout in the 500th regular season professional football game ever held at Winnipeg (Canad Inns) Stadium.

The other damper, the Blue Bombers’ overall performance in their 36-26 loss to the Montreal Alouettes, dropping them to 1-5 on the season heading into their bye week.

“We’ve got to come back with a different mind frame.”

“Defensively, we gave up too many big plays,” said a clearly dejected Paul LaPolice. “We have to score more points. I thought we ran the ball well, but we didn’t throw the ball — we didn’t execute that well enough.”

While quarterback Alex Brink put up a decent stat line in his third start of the season (25-of-39 for 311 yards, 2 TD, 0 INT), the offense sputtered, and the final score was definitely not indicative of the offence’s overall performance throughout the night.

Blue Bomber Chad Simpson rushed for 65 yards on seven carries, adding 40 yards receiving on three receptions, but it’s hard to utilize a tailback as a weapon when you’re constantly trying to catch up.

“The problem is, as you try to stay in rhythm, if you two-and-out the tailback can’t touch the ball,” said LaPolice. “But certainly Chad looked like our best football player.”

The Alouettes lead 15-3 at the half, and lead by as much as 18 before Winnipeg could score a major.

“It’s unfortunate that it’s still happening,” said defensive back Johnny Sears of the Winnipeg defense allowing repeated big plays. “We’ve got to clean it up ASAP, because this isn’t good. We can’t have this.”

Montreal pivot Anthony Calvillo and the Als offence had their way with those whom they used to refer to as “Swaggerville,” totaling 501 yards of offence, fuelled by several deep passes that appeared to stem from missed assignments.

However, Winnipeg’s quarterback questions continue as Brink struggled early, begging the question if LaPolice considered going to Joey Elliott at any point.

“I had a thought,” answered LaPolice. “But (Brink) took us down on a touchdown drive (early in the fourth quarter)… so I kept him in.”

Winnipeg now heads into the Week 7 bye with just a single notch in the ‘W’ column.

“The mindset is frustration,” added LaPolice. “With me. With everybody.”

“I certainly told the players, we’ll evaluate everything we’re doing and if we have to make change, we’ll make change.”

It just may be time to make some big changes, whether it’s to the players on the field, or elsewhere.