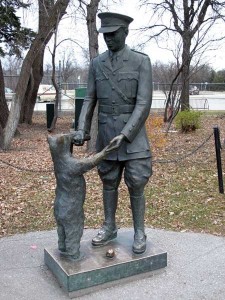 The Assiniboine Park Conservancy has relocated the Lt. Harry Colebourn and Winnie the Bear statue to make it more accessible to the public.

“The statue is an important part of Winnipeg’s history and we wanted it to have as much visibility as possible,” said Margaret Redmond, the Conservancy’s president and CEO. “With high volumes of traffic in the Nature Playground, the majority of them being children, it seemed like a natural fit.”

The bronze statue and plaque was unveiled August 6, 1992 and was donated by the Kinsmen Club of Winnipeg.