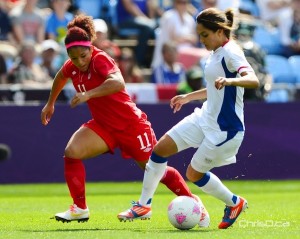 The 25-year-old former Manitoba Bisons soccer player was an instrumental part of Team Canada at the London 2012 Summer Olympics. Scott’s women’s soccer team won bronze in a 1-0 victory over France on August 9.

The newly-crowned Olympian made her way down the escalator at James Richardson International Airport to cheers and congratulatory greetings from the hundreds who came out to welcome her. Chants of “Desiree! Desiree!” rang out moments before her anticipated arrival.

“I’m a very emotional person and to come home and hear my name being screamed the first thing I see — I’m holding back tears right now. It’s absolutely unreal. I love the support. It’s amazing,” Scott said after being welcomed by an onslaught of media.

Asked of her favourite moment from the Games, Scott said it was when teammate Diana Matheson scored the sole goal in extra time to seal Canada’s fate in securing a medal.

“Just to hear that whistle blow — that had to be the moment for me knowing I had hit the podium.”

Scott was modest when asked how she feels about narrowly blocking a shot from France with her knee in front of the net, saying it was a complete team effort.

“I just happened to throw my body and get that ball out of the back of the net. I did everything I could and I happened to be in the right place at the right time.”

Scott has also been an ambassador and role model to younger female soccer players who one day aspire to reach her level of success. That much was evident from the fanfare of young, pre-teen girls dressed in Scott’s jersey with the number 11 on the back.

“Just keep working hard and enjoy it,” were Scott’s words of advice. “You have to have fun doing what you’re doing, and I absolutely love my job.”

After being quickly whisked away from taking questions from the media, Scott took time to sign autographs and soccer balls for her adoring fans. The Olympian even shed a few tears at one point after becoming overwhelmed with the outpouring of support from her hometown city.

“My heart’s still beating very fast,” Scott added, while being drowned out by the crowd singing O Canada in the background. “This is unbelievable. I did not expect this at all. The turnout is phenomenal.”

Winnipeg’s other Olympic medallist, Janine Hanson of the women’s eight rowing team, isn’t expected back in the city with her silver medal until mid-September.